oof. I have been very lacking in the motivation for writing department this week. Since I’m cutting some bits of chapter four, I decided to completely redo my outline and chapter structure. There are several analyses that I’m not too happy with and want to minimize or possibly cut, so hopefully this new organization will help with that.

In better news, I did get my hands on the hard copy of my old Neo-Riemannian paper, for which I never made digital figures – tho I still had the text. I spent today canabalizing it for the Chopin section. The mishmash of my newer writing style combined with the old is sort of awful right now, and I’m thinking about cutting the last two diagrams, but it gives me a solid 5 pages of transformational theory that I will very much have to refresh!

Next week I hope to write the source material portions of chapter four, clean it up a bit and then send it on for edits. While I’m waiting for edits back, I can start the tedious business of making digital examples for all the figures in chapter 4.

When I first took an upper level tonal analysis course, one of the first questions we asked was “what is tonality?” but after that was “what do we do when our most familiar methods do not work?” The E minor Prelude from Chopin’s op 28 (found on page ???) was used to demonstrate how basic Roman numeral harmonic analysis can start to break down and become less useful. Below are a couple examples of RN analysis for selected measures:

The ii- V- i of iv at least follows a P D T framework, but the second example clearly has chords that do not resolve in the expected functional way. Some may describe this as many passing tones moving together, and other sonorities can also be described with set classes instead of tertian harmony. 4-26, 4-27, 4-28 . These set classes will become relevant to the transformational analysis below.

All those years ago, the response to this prelude was a philosophical shrug, and a decision that the piece might not fit so well in a Tonal Analysis framework – and therefore to just ignore the idea of harmonic analysis on it. Philosophy and difficulty with Roman numerals notwithstanding, this prelude is entirely tonal. It is definitely in a key, and E minor is established through traditional functional progressions. Below is included a [DRAFT of a] Schenker graph representing the large-scale functionality of this prelude, with some of the important chords and measures labeled. My reductive analysis of this piece may be different from traditional analyses, but my reduction is specifically designed to interact with the upcoming transformational analysis in a certain way.

Lack of an opening (or any type of) strong tonic before final cadence makes finding scale degree 3 in soprano line difficult – non-chord tone type choices in the first phrase, completely missing on the largest scale in the second phrase. (that me-re-do emphasizes the fake out in mm. 16-17 leading to a pseudo interruption, but does not contribute to my overall Urlinie.) There is a strong emphasis on le/la in the bass line, particularly before cadential motions (mm. 9, 16). A strong root position p-D upsets the PVL (shown in the middle with numbers of half steps plus or minus), supports fa and re in the Urlinie and leads to a deceptive cadence, do arrives four measures earlier than the root position tonic. The tV of the deceptive cadence then morphs to an augmented sixth in inversion – again showing importance of le as bass pitch (even if fi is in the bass on the surface). This finally leads to the D-t and the only root position tonic in last chord.

Since breaks in the PVL highlight shifts to return to functional harmonic workings (cadences) and important P chords, I hear the PVL as prolonging the predominant area. How these areas are prolonged is the work of transformational analysis. After my initial, failed RN analysis so many years ago, I later encountered Neo-Riemannian transformational theory and immediately thought of this piece. Maybe transformational ideas would help bridge the gap where Functional Analysis was less adequate. The basics of some of the transformational ideas were discussed in section 4.1.1; this is where we apply them. The most common transformations are designed for triads only, and this piece definitely has lots of 4vv sonorities, so I am also working with the less common tetrachord transformations.

Richard Cohn discusses this Prelude in Audacious Euphony,[1] and first thing that I drew from his analysis was that the focus was also on bigger, more middleground spans. He mentions the stepwise downward chromatic[2] motions and shows a map of the sum classes,[3] but even these are only the tertian harmony sum classes. The interesting, non-tertian, in-between notes are still treated as non-chord-tones, just now in a different framework.[4]

>The Prelude is a slowly unfolding parallel period both of whose twelve-measure phrases are constructed in four-measure segments. [Figure 7.19 models the first seventeen measures in a 4:1 reduction that represents each measure as a beat, and each segment as a measure.] The first phrase reaches its structural subdominant at m. 9 and then prolongs dominant for three measures. The second phrase roughly inverts those proportions. Subdominant arrives already at the end of its fourth measure followed by eight measures of dominant prolongation prior to the final cadence at m. 25. What has caught the interest of literally dozens of publishing analysis, and many more teachers of analysis, are the connections between the opening tonics of each phrase and their structural subdominants. The voice leading of both connection gestures is exclusively semitonal and distributed among the four voices so as to combine into species familiar from the classical harmonic bestiary: dominant sevenths, minor sevenths, half- and fully diminished sevenths, and French sixths.

… Framing these chromatic downshifts are progressions featuring whole steps. These “leaps” in chromatic space, mark the moments when tonic first loses and then regains its focus…. the events internal to the chromatic downshift bear no harmonic value and colonize no Stufen.<

Cohn is interested in analyzing the prelude for the purpose of “cultivating ways of documenting and exploring motion among standard dissonant harmonies, when those motions do not harken to the call of the tonal forces to which those harmonies are normally subjected under the terms of classical tonality.”

I have found that this prelude uses parsimonius voice leading as a P prolongation within the previously shown functional frameworks. It seemed that the motion became unmoored from the functional pillars primarily in the predominant area, so my analysis will focus on how the p5/6 in mm. 2 and 14 travels to the D in mm. 10 and 20. In Examples 4.? and 4.? below, I have also mapped out the sum classes of many of the sonorities on a tetrachordal system borrowed from Cohn’s “Square Dances with Cubes.”[5]

Cohn’s system only includes set class 4-27 (Mm7 and dm7 chords), so I added in the sum classes for the even number sum classes (made from set classes 4-26 and 4-28, mm7 and dd7 chords) as pivots in between. The first and second phrases make similar overall motions in a slightly different fashion. Each phrase starts at sum class 6, moves anti-clockwise in varying degrees of steps, leaps, and backsteps and eventually ends up on sum class 5 with a Bdom7 harmony. 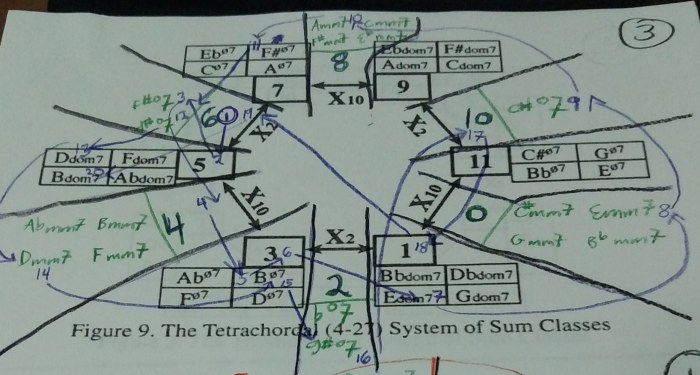 In the first phrase, the trip around the wheel is mostly straightforward. Some might not even consider the detour to position 3 between 2 and 4, because it is not a structural soprano note. Where a spoke is skipped, often, a non-tertian set class will insert to help make the jump – positions 5 and 6 are both in sum class 3, but position 7 is in sum class 1. As the phrase continues the likelihood of a larger jump increases. By the time that the phrase is making a second revolution around the wheel (positions 12 and 13) fewer and fewer sum classes are adjacent. Indeed, larger leaps harken the return to functionality, as short moves via function are much further apart parsimoniously speaking. Jumps around the wheel get bigger as the progression continues. 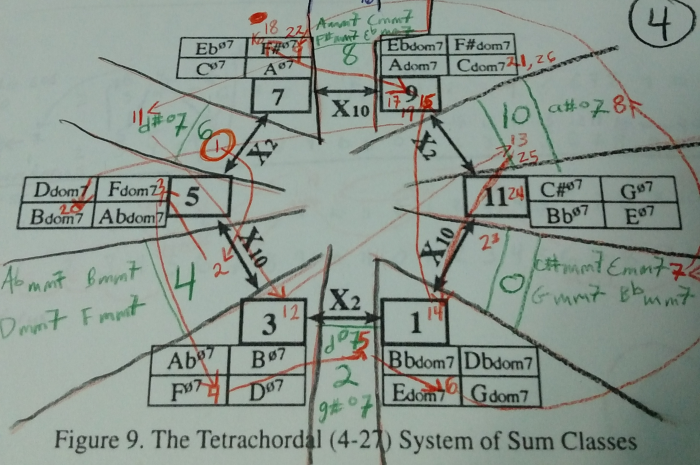 In the second phrase, the chromatic descent is much quicker, as evidenced by more noncontiguous motions between sum classes as more pitches move together instead of one at a time. While the non-functional progressions of the first phrase prolonged the predominant area, here the predominant is shorter and a structural dominant is reached sooner. Chopin is “speeding up” the progression as he goes along.

The expansion of this phrase is in the dominant and cadential areas, creating motion around the sum class wheel that consists of larger jumps as the more functional progressions reassert themselves. Position number 10 is functionally the structural-bass dominant, but does not have its chord yet above it, and the following d#º7 substitutes as the dominant in m. 17. Because position 10 is a dyad, it is left out of the sum class journey. However, it is noteworthy that the strongest dominant so far is upset and unstable in a way that keeps the path on the sum class wheel more smooth.

I have left out the position numbers in instances of repetition, to reduce the number of arrows on the example. Therefore, both examples end at position 20. One double-ended arrow represents the reiterated motion between positions 15 to 19 in mm. 18-20. The deceptive cadence and cadential repetition after position 20 are not as clear to show on this diagram, and are mainly understandable in traditional functionality.

This journey on the sum class wheel is somewhat hard to see, with the multiple circlings around and trying to separate tertian harmonies from non-tertian. The example above shows the sum class wheels straightened out into sum class lines. Tetrachordal members of 4-27 and 4-26 which are not tertian harmonies are on the top line, while the bottom line is tertian harmonies only (all members of 4-26, 4-27, or 4-28). Imagine the left side of the line looping around to connect to the right. The biggest leaps (in the first phrase position 16 to 17 or 18 to 19) are the ones that can be explained functionally, either as predominant moving to dominant, or as dominant moving to tonic. This linear version of the sum classes shows which non-tertian set classes serve as a substitution for either a more tertian parsimony or a more functional chord.

These transformational ideas help link the functional pillars, providing an non-functional internal logic on a small scale, to support the overall large scale functional logic. There may be many 19th Century pieces that would benefit from inspection using both “Neo-Riemannian” and old Riemannian ideas – transformational analysis working with Functional Analysis.