Last week we covered open and closed cadences, using in part, the Theme from Mozart K331 https://www.youtube.com/watch?v=dP9KWQ8hAYk. This week we will only need the first 22 seconds. For reference, the music notation looks like this: 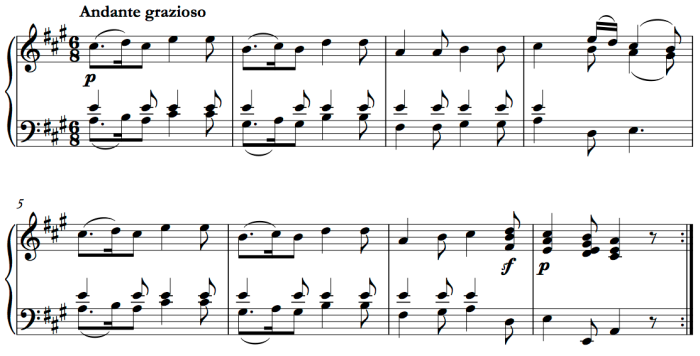 Don’t worry if note reading doesn’t come easily to you. There are plenty of ways to learn to read music (for example, even just reading the Wikipedia page can give you a start: https://en.wikipedia.org/wiki/List_of_musical_symbols) but we’re going to focus on the sound. The very first sound you hear and the sound you hear at the end of the cadence at 0:22 are very similar. These are two versions of the same triad, a collection of three notes also called a chord. When we talk about chords we typically mean triads, but there are also chords with more notes (i.e. seventh chords) or with fewer (power chords). Chords are usually played all notes simultaneously, but there will be times when that is not the case.

Let’s take a quick digression to talk about triads and note names:

The specific chord identified above is an A major triad, with notes named A, C Sharp (#), and E. The word triad implies 3, but not just three notes, the interval or distance between notes is identified as a third, because it spans 3 letter names (A-B-C). So a triad is made up of 3 notes, or two thirds (and two thirds make the interval of a fifth A-B-C-D-E). Major triads have a slightly larger major third on the bottom when all the notes are as close together as possible, and minor triads have a minor third on the bottom – listen to the variation at 4:58 for an example of minor sound.

Remember that there are only 7 letter names, A-G, because the way the physics of sound waves works (recurring cycles of pressure waves measured in Hertz or cycles per second) when a sound wave has double or half (or any other power of 2) as many cycles as another sound wave we perceive the two sounds as the same, but differing in range or octave. So the first sound of this Mozart is based on A 220Hz, but the cadence at 0:22 is based on A 110Hz (if the piano is tuned to A 440Hz) and those two notes are both called A, but differentiated by which octave they are in.

Triads can have any combination of octaves, so long as the letter names of the notes stay the same, but the range and spacing can impact the impression of stability. Also, while there are only 7 letter names, there are 12 distinct notes (piano keys, if it helps) in the European classical tradition. These are indicated with the words sharp (#) and flat (♭) for slightly higher and slightly lower, respectively. So A-C-E is one triad, and A-C#-E is a different one.

We’ll get into more about intervals and chord types later. For now, let’s back to the Mozart.

In this case, A-C#-E the first and last chord of the piece (and of most of the sections throughout the entire recording), which among other reasons, gives it a sense of stability. Hearing this chord at the end of a cadence makes the piece/section feel more closed than another collection of notes might. We will call this chord Tonic. Using the word tonic to label a chord tells other analysts and musicians that you think of this chord as stable, home, or the resolution of tension on some level or another. Other musical parameters, including rhythm and texture, can undermine this sense of stability, but once established, a sense of tonic can last a very long time. If you’re like me, and like to write your analysis on your musical score, I abbreviate tonic with T (or lower case t, if it’s minor).

Now, the cadence that ends at 0:10-0:11 ends on a different chord. This is one of our open cadences from last week. Hear how the notes contribute to the sense of lack of closure? This chord is E-G#-B, and we will use the word Dominant to indicate it’s sense of tension, motion, or open-ness. Dominant chords have a sense of wanting to resolve, preferably to tonic. I abbreviate it D.

If you go back to the cadence at 0:22, the chord directly before the tonic is the dominant. That is part of what makes closed cadences feel closed, not only ending on tonic, but having the dominant to provide a push towards tonic. For more specific cadential terms, a cadence that is D-T is referred to as an Authentic Cadence, while one that ends-0 on D is referred to as a Half Cadence.

If you have access to a piano, a piano app, or another instrument you are familiar with, you can experiment with this feeling of tension between tonic and dominant. Start with a scale – playing one note at a time. The easiest one on piano is probably C major, all the white keys. Start on C (the white key just to the left of the grouping of two black keys) and play one white key at a time going to the right (up in pitch). C-D-E-F-G-A-B – if you stop on B before playing the next octave C, there is a feeling of incompleteness. Depending on how familiar you are with this style of music, it’s pretty irritating! Then you can play with alternating tonic and dominant (in this scale it’d be C-E-G for tonic and G-B-D for dominant). You can play the notes of the chords at once, or you can play them one by one as an arpeggio.

Part of the reason dominant pulls to tonic is that tension from B to C. Notice how the two keys are adjacent, with no black keys in between. Between each white key the interval is called a step or a second, if the letters are adjacent: A-B, B-C, C-D etc. A step with a black key in between the two white keys (A-B) is a whole step or major second, a step without (B-C) is a half step or minor second. That half step at the top of the scale (B-C) is an important part of the pull between tonic and dominant. There’s another white key half step between E-F, but while the B-C half step sounds (in this context) as if it wants to pull up, the E-F half step (in this context) feels more of a downward pull (F-E). This will be important later.

Other important terms as we go forward. That scale C-D-E-F-G-A-B-C outlines the pitch collection of the key of C major. When we talk about music being in a key, we typically mean that it has a specific set of pitches that we expect and can outline in the scale, and also that it uses a tonic and dominant in the way just described above. There is some music which uses all white keys, but not the tonic and dominant of CEG and GBD, so that is not considered C major. There are also minor keys, which I think I will cover better in Lesson 5. There are 12 major keys and 12 minor keys, one for each distinct letter name, including sharps and flats.

To talk about properties of the scale in a generalized fashion; or to be able to move a melody or idea from one key to another, we can use solfège.[*] This is a short hand system to help memorize relationships within a scale, separate from the absolute pitch name. Since Functional Analysis is about harmonic relationships, we commonly need to talk about melodic relationships as well. Always using pitch names and/or intervals can get clumsy and unspecific. So, for the C major scale here are the solfège names:

(Pronounced Doe, ray, me, fah, so, lah, tee, doe. Think of the song from Sound of Music if you need help with pronunciation: https://www.youtube.com/watch?v=1RW3nDRmu6k)

So in the key of the Mozart – A major:

The tonic chord uses the solfège do mi so, and dominant uses so ti re. Ti-Do is the important half step we talked about earlier. The interval between any two given solfège names will stay the same no matter what key you are in. Moving a scale or musical idea from one key to another is known as transposition. Again, more detail on all of these topics will come in further lessons.

Next week: Subdominant and Predominant

Chord – when multiple notes are played simultaneously or make a logical group. Triads are the most common type, but chords with fewer and more notes are possible.

Interval – the distance between notes. Primarily named by the number of letter names spanned.

Major – can refer to some intervals, triads, and keys. Major thirds, major triads, and major keys all share similarities in sound.

Minor – can refer to some intervals, triads, and keys. Minor thirds, minor triads, and minor keys all share similarities in sound.

Octave – interval after which letter names repeat, also 8 letter names spanned. Point at which the number of cycles per second (Hertz) doubles or halves (110Hz, 220Hz, 440Hz are all different octaves of A).

Sharp – # indicates a half step increase in a letter name: C vs C#

Tonic – the triad that takes on the feeling of resolution/home for a given key/piece of music. do mi so

Dominant – the triad that takes on the feeling of tension/motion for a given key/piece of music. so ti re

Authentic Cadence – a Dominant chord followed by a Tonic chord at a place of rest. Closed cadence.

Half Cadence – a cadence that ends on a dominant. Open cadence.

Scale – seven notes of a key played one after another in stepwise fashion: C-D-E-F-G-A-B-C or do re mi fa so la ti do in solfège for major.

Arpeggio – playing a chord with the notes one after another, instead of simultaneously.

Whole step – also known as major second. Most of the steps in a scale. A-B, do re, etc.

Key – a collection of pitches that include a tonic-dominant relationship described above. Comes in major and minor. Often described with a scale, but more than that.

Solfège – the names of notes as related to one another within a scale/key, separate from the absolute letter names. do re mi fa so la ti do are the solfège for major keys, but there are more.

Transposition – the concept of moving a scale or musical idea from one pitch, key, or register to another.

[*] For anyone with strong opinions about various types of solfège: I use moveable-do, do-based minor solfège primarily. There are reasons to use la-based minor or fixed-do, but I find moveable-do to be the system that syncs with Functional Analysis relationships the best. I do also use a fair dash of scale degree numbers later.