Chords are a way that we group notes that work together so that we can talk about their joint impact on music. Often we think of chords as a simultaneity, notes that occur at the same time. But chords can also be arpeggiated, or broken up, and still understood to act as a unit:

The most common type of chords discussed on this blog is a triad. A triad has three notes, each separated by a third, when those notes are in their most close position. For example, any instance of the notes C, E, and G acting together can be understood as a C major triad, no matter what note is on top or bottom (tho those things can change the stability and function of the triad), or how spread out they are.

These mirror the relations between the solfège syllables that begin the major and minor scales: do mi so for major vs. do me so for minor. These are the two most common types of triads. The naturally occurring major triads are do min so, fa la do, and so ti re in major, as well as me so te, le do me, and te re fa in minor. The so ti re major chord is also borrowed into minor keys. Minor triads that occur naturally are re fa la, mi so ti, and la do mi in major, as well as do me so, fa le do, and so te re in minor.

Less common types of triads are diminished and augmented triads. Diminished triads appear naturally in the scale at ti re fa and re fa le[*] in minor. Both thirds are minor in the stack, so the outside interval is a diminished fifth. These are indicated with a abbreviation like F# dim or F#º. Augmented triads are less common, because they are ambiguous in function, but they do sometimes occur. They have two major thirds, and the outside interval is an augmented fifth. They are abbreviated G+ or G aug. They are symmetrical in equal temperament (modern tuning), which composers sometimes use to affect distant modulations. 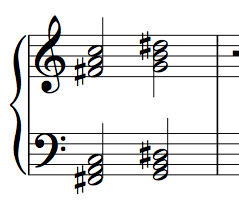 Sometimes, chords have more than three notes. The most common type in tonal music is a seventh chord.[†] This type of chord stacks another third higher when in close position. The fourth note in the stack is called the seventh.

These come in 5 main types, which we can name by their base triad and quality of seventh. The above are major-major (MM7 or M7), major-minor also called dominant (Mm7 or dom7), minor-minor (mm7 or m7), diminished-minor also called half-diminished (dm7 or ø7), and fully diminished (dd7 or º7). Depending on what population of musicians you are talking to, the names and abbreviations might change.

The dominant (major-minor) seventh is probably the most common, because does a large part of defining tonal function. It usually occurs with the solfège so ti re fa. The chord that follows is usually tonic, tho there are exceptions.

The major-major seventh is usually found on the solfège fa la do mi. It often leads to the dominant so ti re. In minor le do me so is possible as well.

The diminished-minor (half-diminished) seventh occurs on ti re fa la in major. There are also cases of re fa le do as a half-diminished seventh in minor, but it depends on the context.[‡]

The fully diminished seventh occurs naturally in minor as ti re fa le, but is often borrowed into other contexts using chromatically altered notes.

Any chord can be chromatically altered, have notes added to or taken away from it, and all of these things can impact the effect the music has/the stability of the chord/make it hard to determine what chord it is. Depending on the style of music, sometimes all notes can be attached to a chord to make sense of them, and other times there is less utility in finding chords on every beat. Additionally, these are just the basics. For more on how chords function in tonality see the sequence introducing Functional Analysis: https://functionalanalysis.blog/category/lessons/page/2/.

[*] Depending on who you talk to, this chord may not be seen as a triad, but instead as a fa le do chord that has a re subbed in for the do. I talk a bit about this here: https://functionalanalysis.blog/2017/01/19/lesson-4-numbers/.

[†] Note that all of the following examples apply to seventh chord usage in tonal music. Jazz, pop, and other 20th/21st Cent. usages may have different names, functions, or uses.